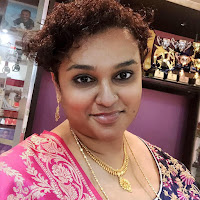 Its amazing what a simple haircut can do to your confidence and the way you carry yourself.
I decided to go for a hair cut - not on an impulse - but it was something I had in mind for some time. Especially when my hair started thinning -  I found no reason to keep it.

But I didn't want just any haircut. It had to be drastic. I was turning 40 and I had to do something. Actually, come to think of it - I have always been gutsy when it comes to my hair. I had it straightened, cropped it till it was way too short and experimented with it. I have colored it brown, purple and red   all through my 20s till end of my 30s .But because I have dark hair - the colors don't always show.

Anyways long story short, I wanted a hair cut. Something really short, easy to maintain and also makes me look good.  I took 2 days to look around for the perfect look and decided on this pixie haircut with platinum silver look. See pic from google

Hubby and son were more than happy to let me do whatever I wanted. So the day after my birthday along with my son we went to the salon for the haircut.

The stylist who tended to me had a light brown colored hair and it looked good on him. And my instructions to him was simple -  chop all my hair away. I want something short and easy. He had his fingers all over my thinning hair for a while and said that I will look good in a pixie. Bingo. And I said go ahead.

But he decided against coloring my hair to silver as it requires bleaching and that will ruin my already thinning hair. So he suggested the lightest brown color on the palette and I gave him the go ahead.

Hair cut, wash, and coloring took almost 2 hours  and by that time my son already had his hair cut and wash.The coloring still didn't show that much -  but I think I will try to lighten it a bit with bleach the next round. I liked the look really, but it felt so light - I can feel the wind on my scalp! I really liked it.

But more than me -  people around me were praising me for my new look, my courage ( seriously- it was just dead protein and I had to let it go) and for my change of style.

One colleague of mine commented that I look like a Singaporean now. My team members love it and so does my hubby. The only person who didn't like it was of course my mum and my dad only noticed the change like a month later ( he actually couldn't see well so not a surprise there).

Anyway I love it. Since I grow out short hair very fast I went on a picture taking spree to capture the first few weeks and have posted it here as well.

Welcoming my 40's in a big bang and hopefully more entertaining changes to come! 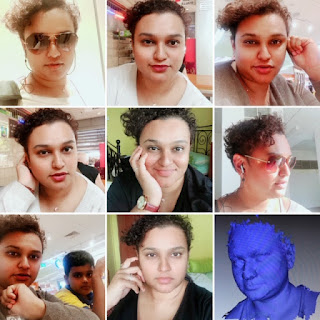