Movie that made me bawl and sob

I have a post in draft mode -  but my research on it has not been completed -  so I thought of drafting and publish another work today. Totally useless topics of course. Lets talk about a movie.

I recently watched a Malayalam movie and I strongly encourage and recommend that you check it out, because its not always I recommend a good movie that's worth your two to three  hours.
"Ennum ninte, Moideen" (Yours Always, Moideen) is a true story which took place in the late seventies to early eighties. It stars my favorite and talented Prithviraj and beautiful Parvathy Menon. It has English subtitles people, so don't worry about not understanding the content.

If there's one movie that had me bawling my eyes out -  its this movie. Let me list the good stuffs of the movie in terms that are of simple English


I realized in the middle of the movie - that love stories are like contracts. They are only valid if both parties are agreeable to the relationship and are willing to handle the brunt of issues along the way that will lead to the ultimate objective of being in love - to be together legally. 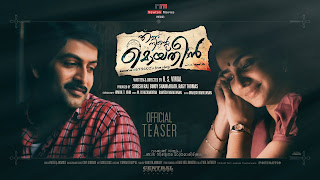 I am not going to spoil the movie for you - but the lovers did none of the shits the people of today are doing. They hardly did what I have done. And I was so so ashamed of it all. In fact I doubted my own relation with hubby till I woke him up in the middle of the night and got my doubts cleared.

Its a simple story. Boy likes girl. They agree to go on a relationship and exchange letters. Letters, mind you. Not SMS or whatsapp. They never touch. Both of them agree that they belong to each other no matter what. Hes a Muslim and she a Brahmin. Both of them face the typical drama and blackmail from their family. But they endure.

That's what had me bawling. All they did was agree to belong to each other.

You know there's one scene that impressed me so much that wished I met that guy myself. The guy(hero) is thrown out of his home, so he goes to stay put at his uncle's place. There, his cousin asks him why he has to go through all these drama. Why not get his girlfriend convert to Islam and get the whole thing over and done with? And that guy tells her, that he will personally kill his girlfriend if she ever does that. I was like...wow.

Do you understand what that means? I mean - yeah we all say we sacrificed our religion in the name of love and so on - but he did not want that. He wants her as she is. He loved her -  her only. Nothing about her religion, upbringing or anything he wants changed. He loves her as she is. Where can I find such a guy anymore? Obviously my hubby objects to that scene. But that had me floored.

One important note - the girl was under house arrest for 25 years. Both of them waited for 25 years. That fellow didn't give in to pressure and marry because his Mum threatened to commit suicide the moment he didn't see his girlfriend. So that tells you a lot about commitment.

So please watch this movie. You can watch it in eintusan.com. It has English subtitles.