Today's the day Raihaan and I have been waiting for - for the past 2 weeks. I booked us to watch a stage play called Junior Claus  -  by The Little Company -  something hes excited about. This is his 2nd stage play.

I kinda think bringing kids to stage dramas where they can see the artistes come to live and interact with them -  makes them feel involved in the drama, and most importantly happy. 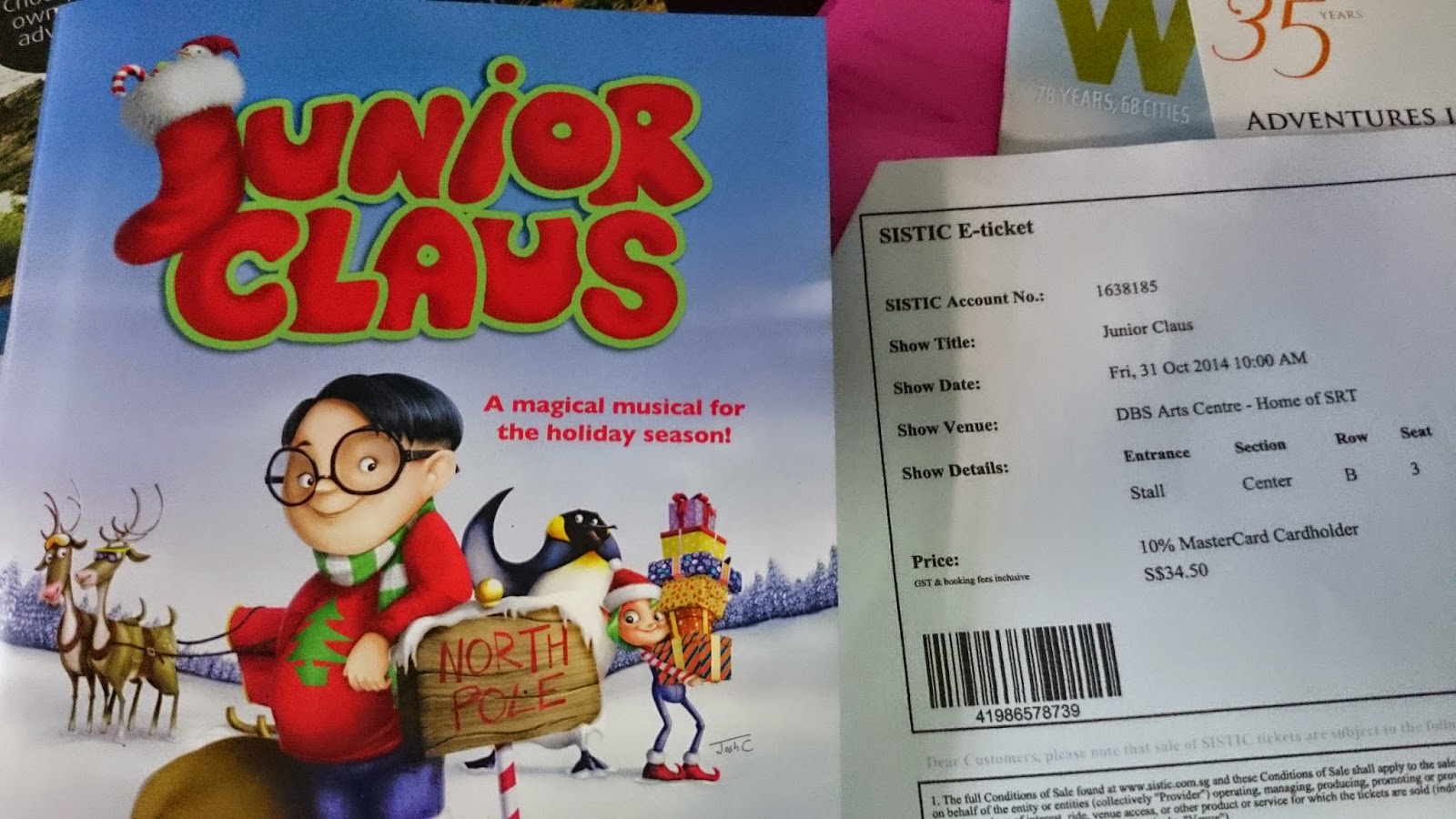 Junior Claus is a 2 hours drama - and you will not feel the drag at all. I am not going to tell you the story. The drama tells it better.

The artistes were superb, the props were outstanding, and the songs were nice and they bring the nice "Christmassy" feeling way ahead of time. There were a lot of kindergarten kids from PCF-  and I have to mention this - all the kids loved it. There was an interval of 15 mins after the first 50 mins and then the 2nd act was about 30 mins long. The show started with the main character -  Junior Clause  ( Dwayne Tan)  -  hes so handsome and dashing actually -  and he acted really well -  the features and all -  none too dramatic. But I loved the Grumpo character (Timothy Wan) -  he brought naturalism to his character and hes so good looking too. I'm not a drama critic -  so don't expect blah blah unpronounceable nouns and verbs about the drama here. Over all -  my kid loved it, all the other kids loved it. So watch it. Its available in Sistic. I'm on the look out for more such stage plays for Raihaan - since we are not going anywhere out of the country for the holidays.

My only qualms about this - is that I booked the seats on the 2nd row from the stage to watch it. It was only after seeing the hall that I realized that we were way too close to the stage. Not that it was a wrong choice of a place to sit and watch -  we were able to see the artistes so close-  but I felt me sitting in the 2nd row from the stage - the small kids were not able to see much. So I had to slide back and watch the show. Other than that -  no issues.

Check out the pics here. Actually -  I don't have the pic of the drama - since we are not allowed to take pictures or videos -  so only us.


Now -  I m back at home and Raihaan is enjoying his Friday night out staying with his grandparents in West Coast. We went out to Vivo to get him another toy ( its a long story) and then lunch and then back to West coast. Overall -  it was a fun day with Raihaan. He makes such a good date. Like Father like son I guess.

Will update more when I can..ciao.