Children and electronic devises - what the...?

I have a routine. I know its hard to believe I can have a normal routine in my life. I usually don't have a typical routine, like walking in the same place over and over again, or watching tv on a typical day or something like that. I go with the flow.Oh but I do hate to work on Mondays. I love to do nothing on that day. But I found out just as recently as yesterday that I have a routine.

When I am done with packing the men in my house out of the house, I will boot up my laptop and will check emails on both my office and personal account, check latest news in Twitter, read articles from my favorite websites, and then check out FB to be the kaypoh we all human beings turned out to be. And during one such routine today morning in office, I saw a post in Twitter from Straits Time.

When clicked on the link, I was shocked to find the following image in ST's FB page. 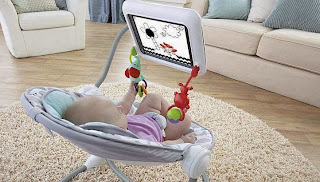 I found the actual question from ST stupid. Is it a good idea to have baby seats with iPad holders? Of course not ...duh? Where did you get your degree from you bozo?

Am I the only one who finds this image of  a baby looking at the iPad chillingly disturbing? Because I really do.

When Raihaan was around a month older and above, I got him to lie down in the child rocker ( somewhat the same in the image) and watch Baby TV from a safe distance. He would watch the colours in the TV passing by. I would grab that time to catch up on the house work. Actually, I thought TV was a life saver for me. It took over the role of a nanny while I do my own things.  At that time, though iPad was upcoming, we didn't have it in our house. I think until about 4 years ago -  we didn't have android phones in our house, so Raihaan was mostly nurtured through running around the house, playing with the toys he has which increases his motor skills and watched baby TV that enabled him to speak earlier and also good English.

When we did bring iPad to our home, Raihaan was already 2 years old. We had that first generation dinosaur iPad you know- the one without the camera and all. We downloaded educational stuffs in there for Raihaan to play around with. The learning how to write the alphabets, the learning how to read words and stuffs like that. Eventually, by learning how to maneuver around the iPad -  Raihaan learnt how to down load the games he want in any android phone and tablets.And now -  Raihaan knows how to install a new game, play with it and uninstall. He of course can only install games that are free. The one that are not free- require password which till now thankfully -  Raihaan does not know since he have no idea how to type.

First of all -  I believe know since Raihaan has been exposed to electronic devises for a while -  he's becoming socially inept. His manners are becoming bad, he does not look up from his game when we ask a question and he does not respond to our calls when we call out to him.  Every time when hes out from school he tries to get my phone from me and play games. Trust me, I have all the games uninstalled before he takes my phone. But he manages to get the same games installed. Because of playing games in  my mobile -  he refuses to run around the house, or play with the toys that he has in the house. He would rather sit in the same place, burning his butt on our couch rather than move around. He would eat and play at the same time. He gets angry and agitated when we take away the phone from him. Not only games. When he watches TV, he would want to have his dinner watching it.

I admit, that it was my mum's idea to do that. Raihaan would not eat when hes playing with his toys when he's at my mum's place. So mum got him to watch cartoons in Cartoon Network and feed him while he gets distracted. She has no idea how much he ate and he has no idea he even ate!!

TA and I noticed it and understood the effect of it soon enough. Actually I did not want to believe that a harmless tablet could bring about such effects, but you see, the iPad influence is new and hence studies are still being conducted to confirm its safety. I was proud of the fact that my son learnt how to play with the iPad at such a young age -  I was blind to its flaws.

We have the iPad hidden from our son. I would not say that Raihaan has become a genius now. Its a work in progress. I am still trying to work out a schedule for him that does not include watching too much TV and also too much work. Like I said in my previous posts -  I want him to have the childhood he deserves, and such I am not going to push him hard to excel in his academics. But I do want him to learn. Hes only 5, and yet hes learnt how to install games and he read about the games from the preview before downloading anything. The same way, when we watch shows from his favorite TV ( Disney XD) he will narrate the show we just watched to ensure that I understood since I ask a lot of questions about the show. Now, dinner is always at the dining table. All electronics off from the table. No TV and no games. TA wants Raihaan to be at the table when eat and is trying to enforce this as a family routine.

There should be a balance of play between electronic devises and the non electronic ones. I believe that children should run around, have great imaginations and build stuffs from cardboard and things like that. I had neighbours of the same age while growing up in Telok Blangah -  I had no time for anything else but play and play. But there aren't that much kids in the block that we live. But because I have to move around too -  I have started bringing him to the playground, watch him run around and play with him. As I mentioned in my comments to ST earlier on - remember the humans in the movie Wall-E?

That is what we are getting our future generations to be like. Maybe its not so bad now, or not that bad in a couple of years when I have my grand kids, but the effects will be telling when my grand kids have their own kids.

So to new parents, or parents in the making, new grand parents who want to pamper and spoil new grand kids, new aunts and uncles who also want to spoil their new nieces and nephews and friends who want to be in the good books of the new parents ( or just want to show off that they can afford a new iPad, iPod, any darn tablets!) -  don't give electronic devices to new borns, toddlers and young kids.  That includes games that can be played from the TV - such as Xbox and Nintendo. If you have promised your kids Xbox - you are such an idiot! TA and I have discussed about this and though I would like to have an Xbox just to have a go at it -  I know that my son will be addicted to it and the work to reverse the changes will be hard.  And as such, he will not get such games from us.  I also know that when he goes to school -  there will be some irritating kids who have rich parents who would have given them such stuffs too -  and Raihaan would pester us for it. I am not blind to that fact. Lets see when the time comes, but for now - its a no.

Raihaan is not going to waste his childhood on virtual reality. Period.