The case of the Missing Holmes

My Sherlock is gone!!!!
I am so shocked!!!
I actually loved the first episode of Sherlock so much that I configured the Series recording in the damn setup box a week ago. Even when I was channel hopping during  my depressive bouts, I saw Sherlocks and I saw it being recorded ( by the red ball at the bottom right on the screen). Since I was sad, I thought of watching it later. 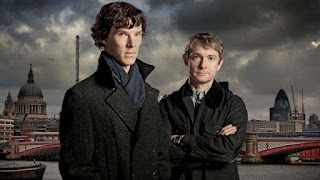 Come morning when I was checking if Sherlock was recorded, to my horror, it was not! That damn thing is missing. I feel so cheated!!! Almost all of a sudden, i let out floodgates of regrets! I should have done this, and I should have done that. Most importantly I spent time channel hopping and watching Leverage 4 instead of watching my beloved Sherlock!!!

Someone mentioned somewhere ( I do not have the time to quote -  what am I doing? Researching? Duh) that the Sherlock serial was in fact old and that it was in 2010 that the first episode was aired. I remembered it being aired in one of the Channels - again I do not remember which, but its not in one of our paid channels.
And personally at that time, I kind of found the actor playing Sherlock ugly. Well not ugly, that's too crude a word coming out from an ugly bitch like me. Hes just not Holmes type. I think I was expecting the Robert Downey Jr type or something. But after one episode which I had to record to watch later when I have the time, I was hooked. Even Hubby. It somehow is not the '10 episodes on 1 season' kind of serial. Its more of 90 min episode and they only have three episodes in one season. So far there is only 2 season and I think the 3rd one is about to begin shooting or something like that.

I think I have to ask Rabia for help again. I asked her to send me the entire collection of Merlin the beginning of this year and that kind soul actually did. Very rare to find friends like that!! But I want Sherlock!  I am actually so depressed! I got to go back to my research before the Little Master awakes.

Anyway, I still did not have the time to blog more in detail about my Vettai marathon. But I will once the assignment and exam season ends. Maybe the Vasantham people can come up with an audio CD of all the songs they came up in Vettai or compile all the songs in all the serials they had (I would buy first) and perhaps ringtone and all. So far I have my own customized V ringtone, very proud of it though.

Again, steering off the subject...I want my bloody Holmes! I want my bloody difficult and hard to understand English speaking Holmes!!!  Why did the setup box do this to me!!!

I need to punish myself with more research. Really do.
Ciao.