Raihaan's birthday celebrations were a big blast last weekend! All of us enjoyed it very much actually. First of all, Raihaan had his gift from me, the night before his birthday. I kept it hidden from him and got him to discover it . I bought him a V Tech Kidizoom camera which I had it ordered and bought from eBay in UK. He was so happy with it, I realized it was a big mistake to hand his gift over to him during his sleeping time. 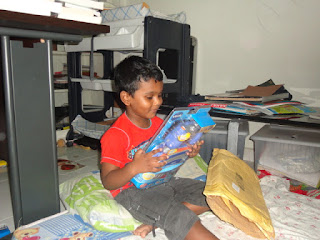 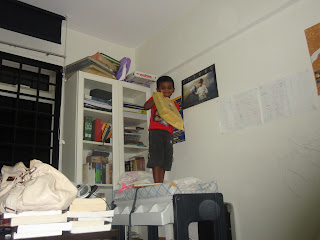 Since Raihaan's birthday was not well planned, we took a last minute decision to go to Universal Studios the following morning, pick up Raihaan's cake at Clementi Mall and then be back home in time to cut his cake at 1949hrs. So the following morning, TA, Raihaan, me and our inlaw had our breakfast at Teban Market, took the cab to Sentosa and walked up to Universal Studio. It was amazing actually. Raihaan's birthday present from all of us was the Transformer Ride and that's where I wanted to go first. But because we were pretty early, we started to walk from the Fantasy section.

There was this ride at the Shrek section which was a mini roller coaster actually which had my senses refreshed by the end of the 3 minutes ride. All I did was close my eyes together with Raihaan. We went to another Shrek castle where there was an animation movie of Shrek and Fiona where the seats would bump according to the movie. It was the 4D animation thingy where our entire family enjoyed. Once we came out from the movie it started to rain and thus we were stuck at a small cafe which had a shelter for about 20 minutes. We bought this see through plastic rain coat the Universal Staffs were selling at an exorbitant $3 for a pack ( 1 adult and 1 kid rain coats). We took a run to the food court opposite since it was a lunch time and to our dismay, it was a total mess. It looked like Amara Hotel foodcourt on a busy peak period!
We had to wait an awful long time before TA found us a table to sit and have our lunch. Raihaan was asleep the whole time ( which was when we entered the foodcourt till the food came to our table). 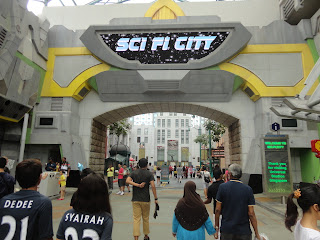 According to TA who bought the food, there was only 2 types of food that was halal was sold by Malay staff and that was chicken rice and noodles. In total, we were waiting out the rain to stop for 1.5 hours. TA and I decided to check out the Transformer Ride immediately before it started to rain again and mess up our day, so we walked quickly towards the Sci Fi City section. Along the way was the Egyptian Section where there was an In house rollercoaster ride as well. Kids and bags were not allowed so TA and I walked around the maze to find a huge q waiting. Since we left our in laws and Raihaan in the drizzle we did not want them to wait any longer so we came out of the maze, and walked to the Sci Fi City which was not so far away.

We found the Transformer Ride, got Raihaan to take picture over there and we walked into the Ride. It was another long wiggly q as well, but with so much people waiting to take the ride, I was not surprised with the wiggly lines.
The area was set as a military base, where as mentioned in the famous Transformer movies the 'All Spark" is contained. The bad guys break in and steal in while the good guys must rush to save. The set was wonderful with all the gizmos of a military base. The emergency rotating lights, the numerous monitors and instructions given my Optimus prime and Evac ( which was the transformer we going to get into) they were kind of cool. Once we took the 3D glasses, we were asked how many of us we were. Since we were a group of 5, we were then divided according the rows of the convoy. Each row seats 4 people. So TA, Raihaan and I were seated in the first row of the convoy and no one was seated beside me. My in laws were seated just behind TA and Raihaan. 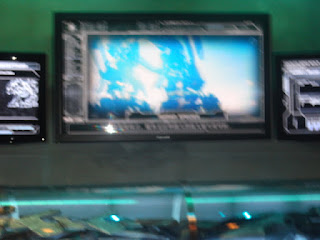 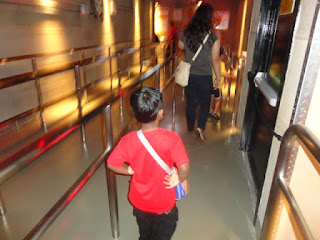 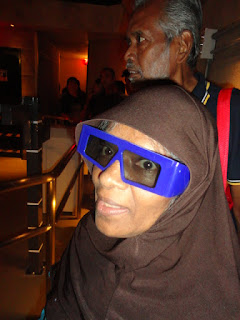 The ride was wonderful, exciting and mind blowing. It was just like in the movies, but you are living it. The Evac( thats the name of the convoy we were in) is in charge of getting the "All Spark" and escapes from the Decepticons, So, the convoy is like moving here and there, and is pulled in so many different directions and you get water sprinkled and heat blasts (you actually feel the heat) and then you get thrown in to a building and pulled out of it and dragged down from a very tall building and then saved by Bumblebee.It was awesome....words cannot describe. My FIL enjoyed it so very much. TA and I loved the ride so much, we went in another 2 more times! It was just awesome, seriously it was. I have to thank God the ride did not hiccup when we were there.


After Transformer Ride, we went to a few more rides and events. We went to Water World. It was a 30 minutes show that has actors and actress re enacting the last scenes of the movie. It was full of pyrotechnics, and water works and surprises. It was fun too, but we had to wait for 15 mins for the show to start, since there was only 3 shows and two hour intervals.

After that, we checked out other small rides such as riding the carousels where by that time, there were not much people. We walked in, waited for a while and then took the ride. Surprisingly, Raihaan did not want to sit on any of the character. He prefered to ride on the seat together with his grandparents.Only TA and I sat on the carousels.


We walked around a bit exploring other sectors such as the Hollywood Street, took some pictures, took a break to have expensive tea and snacks and then decided to return home at about 6.20pm plus.
We took the cab, got down at Clementi Mall to collect the cake I ordered for Raihaan at Bengawan Solo. It was a special Transformer Cake. Went home after collecting it and we were home just in time to cut it.
We had Rama and Sara who we met after a very long break to celebrate Raihaan's birthday as well. They were a surprise indeed. After having the cake cut, I prepared a very fast and simple dinner of chapathi for everyone. It was fun, I had the time to talk to Rama and find out about her life. Raihaan enjoyed a great deal with the girls. He loved them a lot from what I saw at the end of the night. He kept crying and crying and refused to let them go.


All in all, it was a wonderful event....something unforgettable with us enjoying the rides in USS and with the surprise visit from Rama and Sara together with their beautiful kids.At least we get to keep in touch again.