Its been a while since I posted...very much aware of that. So far TA's birthday has passed and so did Valentines. For the first time, I had a surprise valentine's day gift from hubby.

Anyway TA's birthday was such a small and private and huge affair internally. I started cooking in the morning, making preparations for the dinner to surprise TA. My gift to TA which was an engraved cuff link did not arrive till the next day actually. I also sent out a bouquet of flowers with mini cakes to his office.  We spent the night taking pictures and cutting cake. 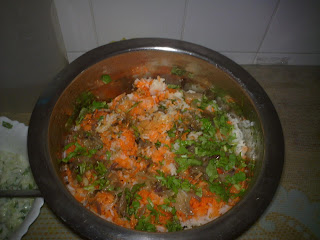 Valentines was yesterday. I was honestly thinking that this year's Valentines was going to be like every other day -  but yet hubby remembered to wish me Happy Valentines in the morning and he sent me a bouquet of blue and red roses. Oh..they are so beautiful. 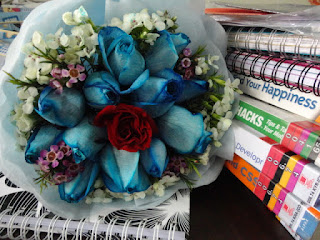 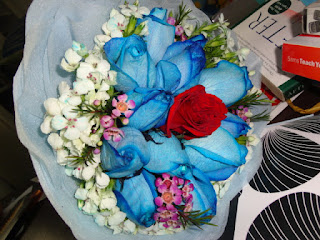 The next is Raihaan's birthday and we are still confused with the preparations. Usually it will be a standard party. But we had a disagreement with my mum and thus my whole family will not be coming, and I just don't feel like making it a big hoo haa since we are not financially stable this month. So instead of wasting money on having a grand birthday party like we had last year, it will be a very small and private party within the family. Raihaan wants a cake, so I have ordered a Transformer cake for him. Most probably we would cut the cake on Saturday and then bring him to the Transformer ride on Sunday. Again, still not sure. We would just go with the flow. 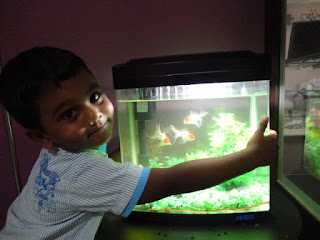 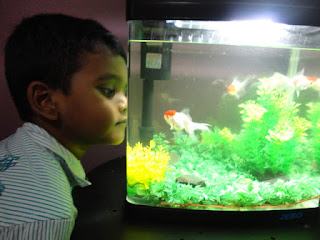 Hubby got Raihaan a new fish tank. Both TA and him bought it together without telling me. It was a pleasant surprise though. Thats Raihaan's first ever pet. Lets see how long it will live.

I bought him a kiddy camera which will only be available to him on the day he cuts his cake at 1949hrs.

Apart from that -  life is still going on. I have yet to work on the loose ends of my website, yet to complete reading the books I borrowed and yet to find the finances for my studies.
As it is, my tenants are leaving end of this month, and I have no idea how to save extra money for my course. I am making arrangement to apply for a bank loan, but Im not sure it would get approved. Keeping my fingers crossed.

By the way, my in laws are leaving for Chennai at the end of this month as well. Their application for the long term visa has been declined and my FIL did not want to do border crossing. Think he wants to go back to his crib for a while or something. He confirmed that he will arrive again a month later. Well as long as they return back to us to recover, I am fine and ok.

Apart from that, nothing else to report. Will update if I have more.