Skip to main content
April 08, 2011
Ok, so its been a week since i blogged here. Actually continuing up from last week, TA asked me to wear a evening gown for last Friday right? Well the surprise was actually checking out the theatrical performance of ' The Lion King'. TA had tickets for the show. Actually the tickets were for Andrew, but he gave them away to TA. Mishoo, TA's colleague was given tickets as well. So I met up with TA at Marina Bay Sands resort, then met up with Mishoo and his wife at High Society ( the name fits actually) for net working. I was assuming incorrectly that we were going for a dinner at Marina Bay Sands instead.  So i skipped lunch and did not cook dinner as well. So i was pretty much hungry when we there. After maybe about half an hour of networking ( we din know anyone else except for each other). It was an event organised by TruMarine, one of TA's counterpart or something. So almost all those who attended were from the shipping community only that we have no idea who they were.

After stealing a bit of cupcake here and there and drinks, we went upstairs to the theatre and watched the show. It was really good. I just have no idea how to describe it. Its my first performance, where the actual cost of the ticket is actually SGD115 per pax!!! We were just a couple of rows away from the performance area. The performance was wonderful, the songs were fantastic and the actors were  awesome!

We didn't have dinner afterwards, we just went back home, dressed down, went to Al barakat's, had dinner and headed back home.

Oh by the way did i mention that the World Cup Cricket cup was held the following day on Sat? India won by the way.

Anyway the weekend was great as well. The following day which was a Saturday, we bought the kids (my nephew was at west coast and we asked his mum's permission via my mum to bring him out). We were supposed to bring the kids out to Hort Park. Instead we deviated from the normal course. We went back to Teban, packed the essentials to travel light, and headed to Tanjong Pagar. After that we were supposed to go to Labrador park to check out the sea and ferries. Instead we went to Marina South Pier, took the bog expensive ferry to Kusu Island. We took plenty of pics ( minus my nephew) to check out the turtles there boy the kids had such fun. It was really good. By the end of the trip, all of us were so tired. After sending mohd home, who slept in the cab itself, we went home. Raihaan slept kinda late, but immediately when put on the bed. It was the same night where the cricket match was held. 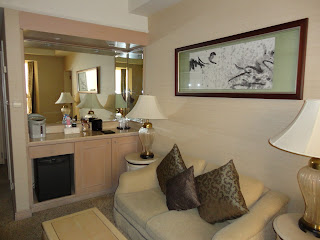 But also have to admit the weekend was not so great. I made a very big mistake of opening a sparkling water bottle with my jaws. The result -  i had big big sore jaw and head ache the entire weekend. I was so tried and so halfway dead. i could not focus, could no do anything. After our trip to Kusu Island, all i did was strip down to my sleep clothes, take out my lenses and sleep all the way till night. And guess what -  TA did not get the dinner at all. Trust my hubby to arrange dinner when i m sick. I did not even attend the pot luck held  by the team the following day.

Life went back to normal and pain free by Monday thank god.

This week however, TA managed to get a room in Trader's Hotel for us to stay for one night on Wednesday night. I was away in office on Wednesday, so i left early, picked up a very sleepy Raihaan, packed the luggage for the night, took a cab to the hotel, checked in, had dinner at Starbucks and slept through. We had breakfast as a family and then TA left for work. Raihaan and i, went back to the room, got him to watch Cartoon network while i did my work at my lap top and then at about 11am went swimming. An hour later, out of the pool, showered Raihaan, fed him food from Room service, had a long shower in the tub, packed and checked out, reached home. Whew.

And today, brought Raihaan out to watch Rio in 3D, he broke his lens ( thank god i was not charged for that), had lunch at Earle Swenson, shop for books at Page One and took bus home. Now currently Raihaan has missed his afternoon nap and i m hoping he will sleep early. TA will be going to PASE alter and i have not prepared any dinner yet.

Anyway will end post with pictures taken for the week.