Bit of news...Raihaan's birthday bash ended a week ago! Haha! Yes had no time to update or post the pics here. I will upload some of the pics here. The rest of them are in FB as per normal.

Life is slowly coming into normalcy here. My tenants have moved out on Sat itself and the house is a bit quiet. Miss them. Raihaan kept asking for Robo the moment he came back from Mum's place today. Feel bad for Raihaan.

TA's BIL dropped by last Sun ( the day after Raihaan's party) and i was very busy trying to clean and cook at the same time. Managed it pretty well. He attended the open meeting with TA on Wednesday and was supposed to go to JB on Thursday. But unfortunately, TA's boss came down from Norway and thus was not able to leave. So they packed up and left for JB on Friday evening. TA returned back home Sat afternoon.

Well anyway today we had open meeting within the group at the Civil Service club and TA and Shiraj were the hosts. The team leaders came to visit TA and brief him on his role last night! Talk about commitment -  they have loads of it!! Have lots to learn from them!

Anyway the meeting went well. It was pretty long. From 1330hrs to 1830hrs. Overall - it was good, but my back hurt like crazy.

Life will return back to its normal pace from tomorrow onwards. We call it the 'Reset' day. Ever since our vacation, TA had not had a single rest. Just forced him to sleep so that he can wake up on time to go to work tomorrow. I on the other hand -  have work to do.

I will start focusing on my work and business together with Raihaan and house. Can't still be in honeymoon mode for such a long time ryt?
Anyway regarding the distraction that was bugging me since the beginning of the year -  it's still there. Have decided to leave it as it is. I need the distraction at times. 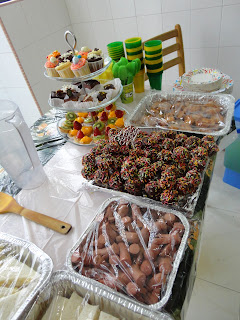