Before i begin my post of the day, i will like to begin it with a word of apology to Mr Steve who commented on my post. Hes the first stranger to post in my blog!!! Anyway i guess he must have taken what i said about attending Christian groups seriously. I will like to apologise to him if what i mentioned in my post -  may have offended him. Sorry about that Mr Steve. I will look into your blog soon enough. Thanks.

Well anyway its day5 of Ice Age at home. Brought Raihaan out the airport and had dinner with him.It seems that both hubby and Bals had dinner at Al Barakats again, cos they came up just when i was trying to open the door to my house!

I wonder when hubby will start to thaw and talk to me. I am tired of sleeping in the study room all alone. I did not want hubby to sleep alone, thus i got Raihaan to sleep beside him, while i was all alone in the study. Haiz. Perils of being married. Lots of give and take.

Anyway going to one of those Amway meeting at Guru's place tonite. It seemed that Guru himself called hubby and said that he wanted to meet him. I m not sure what his intents are, but if its about asking us to consider the IBO thingy -then i think i will have to do something about that. What i m not sure as usual.
Also my counter part, Ester has not reset my email as such i m not able to receive my office emails or configure my BB. IF i just configure my BB, i will be able to start using the BB instead of letting it be there not doing anything. I even bought a ,magazine about BB which has lots of useful stuffs about BB. Will be reading more about that later.

I have things to do today. Just sent Raihaan to West Coast to be with his grandparents. Back home. Will be doing some more digging of Amway and then watch the two movies that i have not watched yet ( Invictus and Green Zone) ,clean up, cook dinner and then get out to the meeting.

Will post more when i have the time.
Leaving with pic taken at the airport. 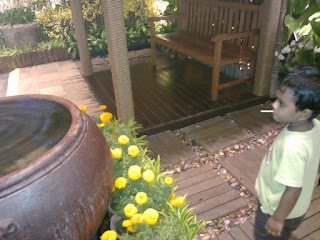 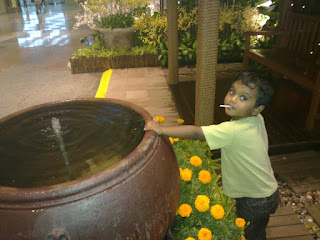 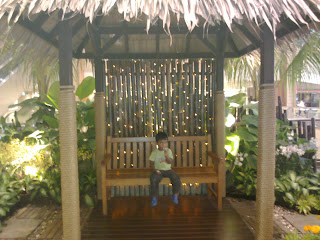