I m at my mum's place for the 3rd time this week.
I was here on Tues when I came here to bring Raihaan over, go to the library and then to Yoga. We let Raihaan sleep over on Tues.


On Wednesday yesterday, it was TA's convocation day. I also had henna class for the day.
So i asked Vino to bring forward the class so that i can come earlier. I came over in the morning, quickly created the henna homeworks designs that i was supposed to do for the week , play with Raihaan and rush to Vinoz without lunch.

I was 15 mins late when i reached her place though. But then still, within an hour later, i was out and about to Tanjong Pagar. Once i reached there, i put on my evening dress and makeup and waited for TA to come. We then went over to Raffles Convention centre
It was a long wait actually. TA had to collect his regalia, register for his seat and then linger around in the waiting room for photo taking. I was there from 5 plus to 7. They only let the guests in the room at 7pm. Kinda tough time for me. All I did was to follow TA around,take more pictures of him and walk around.


The convocation went well. It was hard to see that TA had to graduated and get his degree without his parents here for him. But nevertheless, he kept saying he was thankful that i was here for him. He was so cute, out there in the stage when he collected his degree from the Chancellor.

We did try to get the refreshments once the ceremony was over, but somehow i think we were late,cos for the first time ever, i have seen many many empty trays at the buffet counter.
We did try our best to look for some pastries, take some more pictures and return the regalia back to the registration counter. We had a quick dinner at BK and then took the train and bus back to West Coast to pick Raihaan up.


Today, i did not want to spend the rest of the day with Raihaan just being at home. I was thinking of letting him run around in West Coast Park after having breakfast at Mc Dees. But then as usual, whatever i plan does not seem to work out when Raihaan is involved. I managed to get him to drink his breakfast, shower and get him out of the door by 10am. Instead of going over to West Coast park for the breakfast- i changed my mind and decided to go to IMM instead. They have McDees there as well.

So we reached IMM by 1045 hrs ( not forgetting to include the busride from home and the walk under the bright sunlight). Brought kids meal for him and pancakes for me. Both of us had pancakes. He seemed to like them somehow, He ate the full 2 sets, When i sensed that he was getting bored of tied down to the baby chair, i quicky fininshed my breakfast and rushed him out to the 2nd floor when i was sure they had the rocking toys. I went window shopping and bought puzzles for Munna,baloon for Raihaan and something he took which had a plush strawberry toy. Once that was done, i got him up on some of the toys and all. 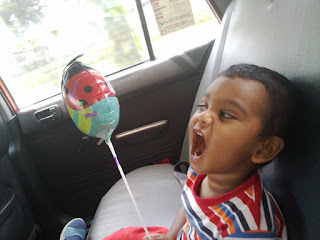 He had lots of fun runing around.
Once the running was over, we took the cab to my mum's place where i am now typing this. Raihaan is asleep with my mum. Once hes awake, I will have to go back home and prepare to cook for TA. I guess that might have to wait,cos TA will bc coming home late. He said he will be going to a farewell dinner...some sort of networking thingy. So i dun think i will need to rush back home after all.


Anyway at the moment, I m uploading the pics taken at the convocation. Check it out in the multiply or facebook site.